Virtualizing Ubuntu with VirtualBox in Windows 8.1

After my homework was done tonight, I decided to have a little fun and experiment with virtual machines and their relationships with their hosts. More on my ultimate goal with this experiment later, but it may suffice to say that the necessary means to the end included running a virtual machine with some kind of visual GUI interface with remote desktop access. I chose Ubuntu for this task because it's a free Linux based OS that includes a simple GUI that I'm familiar with.

I had a harder time than expected getting this all set up, for a few reasons. For one, it wasn't easy finding a comprehensive guide on how to do much of this. I did eventually find a very handy guide to setting up the basic Ubuntu VM in Oracle's VirtualBox here. The guide is straightforward for beginners, but there were still sticking points for me that I want to go over.

The first few basic steps to pulling this off (as listed in the guide linked above) are to get VirtualBox, get a copy of Ubuntu in .iso format (32 bit versions are more reliable and easy to work with for this), and install Ubuntu into a new VM in VirtualBox using the .iso. This is, however, already a departure from my initial expectation.

In the past, I've been running VMs from TurnKeyLinux. The fully provisioned TKL system images I've been using came in the form of appliances, which are extremely handy. VirtualBox allows you to import an appliance in a single operation; you don't even really need to configure anything. It will just run the VM with all the software you wanted provisioned. I most recently downloaded a LAMP stack running on a Debian distro that comes out of the box so conveniently pre-configured that you can access phpMyAdmin on the VM from your host in about five minutes from the time you initiate the appliance download. It's really that easy. But I digress.

In my folly, I assumed an appliance would exist for a simple, clean installation of Ubuntu. What I found instead were dead links, shady sources that I didn't fully trust, and an appliance I tried to install that did run, but would hang on any login attempted. It took me a while before I realized, thanks to the tutorial linked above, that there was another way; that being the .iso installation.

So I did that. Lo and behold, using the handy dandy tutorial, I had Linux running in a VM inside ten minutes. But it looked horrible. Absolutely horrible. The resolution was capped at 640x480, and all the window contents were so badly cut off that the GUI was literally unusable.

This was the best I could get after my initial installation. 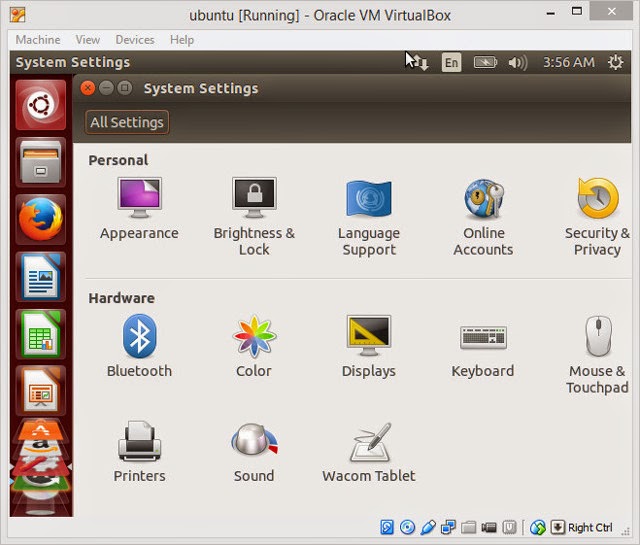 To make a long story just-a-little-less-long, an Ubuntu VM needs to have its device drivers and system applications installed after the OS is installed into the VM. This is done via the installation, in the case of VirtualBox, of the VirtualBox Guest Additions. But even armed with this knowledge, it's not easy figuring out how to get the blasted things into your VM.

I found some threads suggesting all kinds of terminal commands, sudo apt-get install blah-de-blah-de-blah. It might be due to my version of Ubuntu or for other reasons (I never really figured it out), but none this of this worked for me. I got errors about missing dependencies; I tried to manually install these, only to find absent dependencies chaining together; several steps along that chain I came to a place where a vague message about existing packages preventing dependency installation prompted me to flip tables and head in search of another solution.

Turns out that the Guest Additions themselves are contained on yet another .iso. I went through another minor crisis trying to source and install the appropriate .iso file all from within the still-ailing VM itself, because that's where it needs to be installed. To my chagrin, it turns out the Guest Additions .iso is already there once you get Ubuntu running in a VirtualBox VM. You just spool up your Ubuntu VM, then in the VM view window you visit the Devices menu and select Insert Guest Additions CD image.... Wow. Well. That was easy, eh?

Now, for the long-ago promised revelation of my ultimate goal in all of this. Earlier tonight I dropped a line on Facebook about how I could see it being easy to get lost when you have multiple VM and remote desktop views open on the same machine. A friend and I went back and forth about it until I joked about remoting into the host machine from its own guest VM. The glorious result took a couple of hours to achieve, but the laughs and learning were worth it. 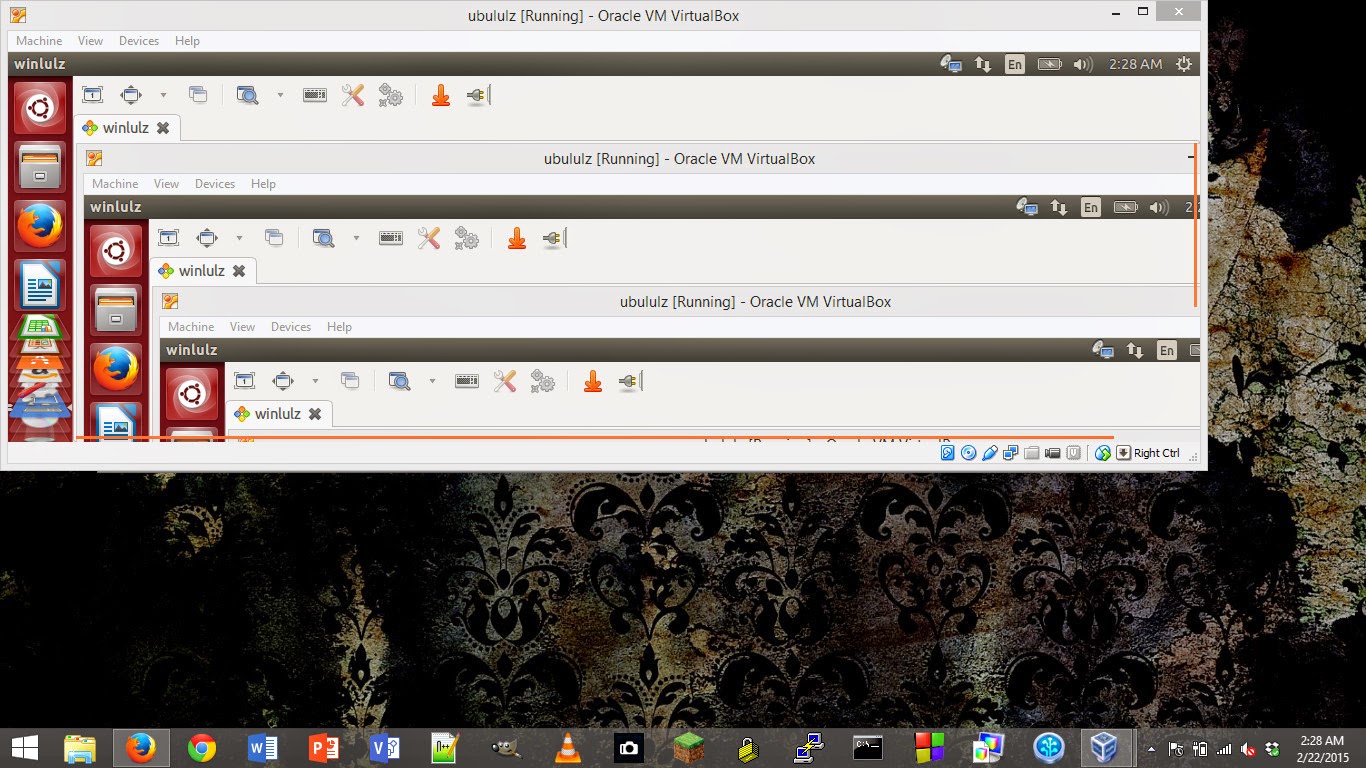